All your sites are just one click away from running on Frappe Cloud. From Mario to Frappe Cloud Marketplace, here’s unwrapping Hussain’s journey. 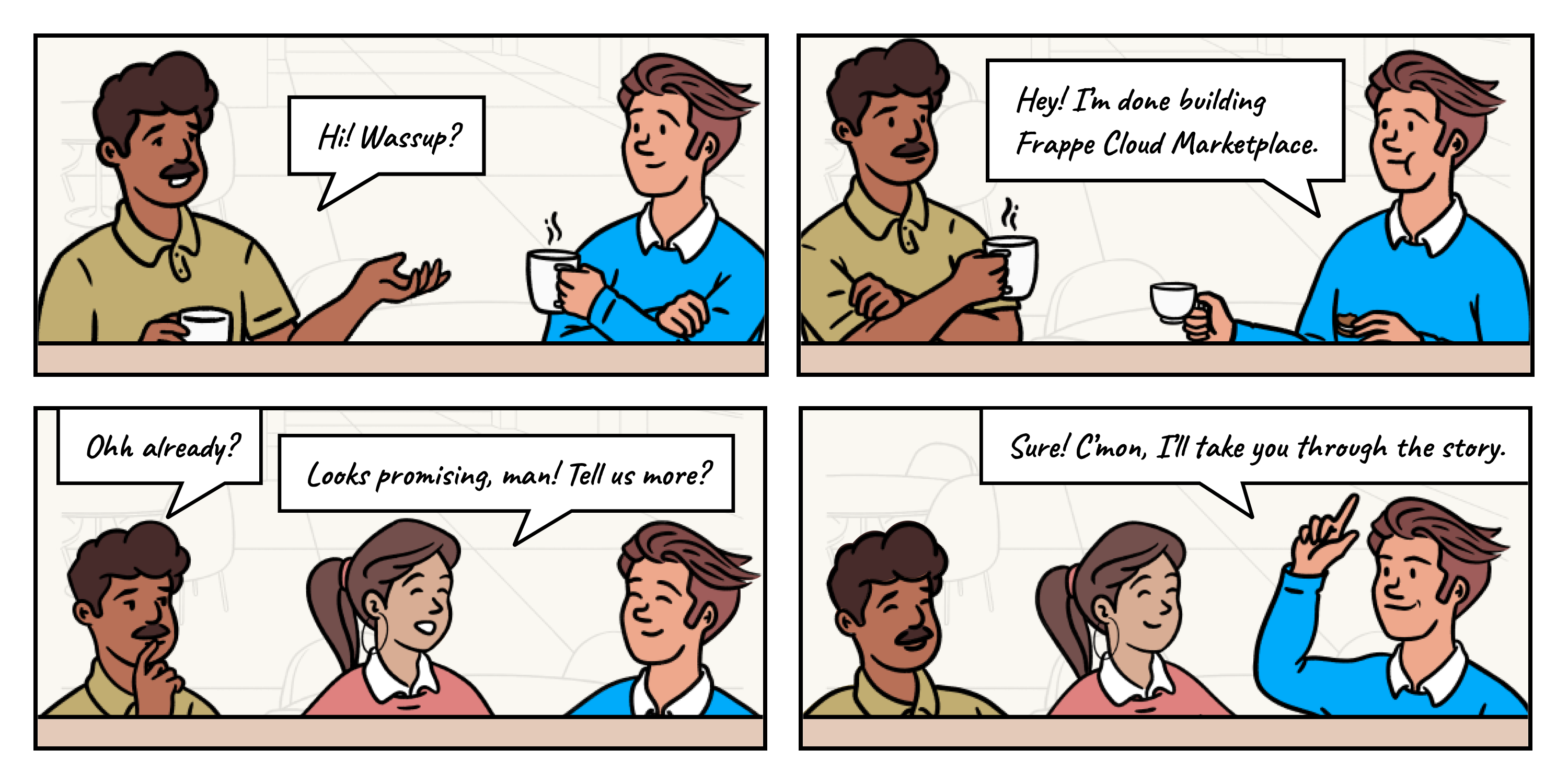 At the age of 15, Hussain argued with his parents to buy him a laptop just so that he could play games and learn the basics of technology. After months of arguing, his brother who lived in Saudi Arabia finally sent him the laptop as a gift. He started playing Mario games and simultaneously stumbled upon a few courses from Microsoft. There he came across a C# course by Bob Tabor, this was the beginning of his journey into the world of 0s and 1s.

During high school, he started digging more into web programming and software development in general. Once he had learned the basics of coding, he extended a helping hand to his friends and started teaching them. One thing that differentiates him from his family is that he is the chain breaker.

None of his family members come from a technology background, business runs in their veins. Hussain is the odd one out. He spent his early childhood collecting eggs from chicken sheds, running behind ducks and cow calves. Who would have thought that one day he would end up being a Software Engineer? However, his parents never forced their thoughts on him to choose anything. If they would have insisted, he would have been an agriculturist without any question. But his father always left the decisions to him and told: “pursue whatever interests you, choose whatever subject you want, want to do an online degree, do it.”

Hussain joined Frappe on 22 February 2021 as an Intern. Faris and Nabin rethought hiring him as an Intern because they have been through some of his side projects and got impressed by his work and their immediate thought was that he qualifies for a full-time employee. He has been a self-taught developer and explored open-source software, learned other web technologies like front-end, back-end, etc.

The core team in ERPNext was forming teams to work on different modules, Hussain was interested in the education module and hence chose the team working on the HR and Education module. There he worked on a couple of features under Rucha’s mentorship.

Abhishek asked the team if someone was interested in working on a few features for the framework, and Hussain instantly expressed his interest and made his first Frappe Framework contribution a day later.

From day one at Frappe, he was fascinated by Frappe Cloud and was fortunate enough to get a chance when the Cloud team needed someone to work on SaaS-related development. He immediately reached out to Faris and got a green flag to join the team!

Let us understand how he brought the whole system to life.

Aditya and the team were planning a roadmap for Frappe Cloud, and Frappe Cloud Marketplace was one of its major features. Meanwhile, Faris asked Hussain if he would like to take up this project. The same day, Hussain dug deeper into the idea of Marketplace and came up with a plan of action. Curiosity struck Hussain had a few calls with Aditya to understand the features of Frappe Cloud and the long-term goal behind making Marketplace.

Since then he has been working on various aspects of Marketplace like the app dashboard, marketplace website, app subscriptions, app analytics, and more.

What is the Frappe Cloud Marketplace?

It is a platform to share the Frappe apps publicly with the Frappe Cloud community. It makes it very easy for Frappe Cloud users to get an app onto their Frappe site. The developer can list free or paid apps for other users to use.

While creating Frappe Cloud Marketplace, Hussain ensured that the process is hassle-free and seamless. Hence, the user can easily create a developer account, with just a click of a button they can bring their app from Github to Frappe Cloud, and manage their releases. The app dashboard gives the power to the developer to control everything about the app.

Earlier, there were nine apps on the Marketplace listing. Three apps were third-party apps, and the rest were in-house apps. ERPNext was one of them. 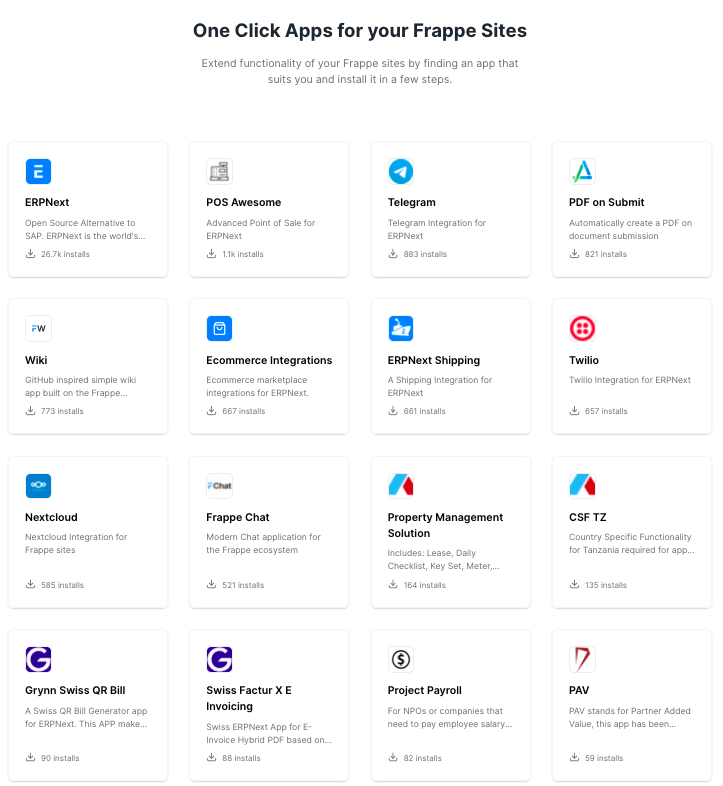 (Snapshot of the apps on the Frappe Cloud Marketplace)

Rome wasn't built in a day

It all started on the white page of his notebook. He laid out the end goals along with the major components of FC Marketplace. Later he started modeling doctypes, writing controllers, and making sleek UI. This was the beginning of the FC Marketplace.

Hussain is a Computer Science student at the University of London and a full-time employee at Frappe. One of the biggest motivating factors for him to take up this job was that he does not have to work from the office. Remote working was a deal-breaker for him. He keeps his weekend dedicated to studies and weekdays are power-packed with his work._ “The leave policies at Frappe help him cover his syllabus and attend online examinations”_, he adds.

Since this is his first job, his role demanded him to have a good understanding of Software Engineering principles. Faris and Aditya helped him learn it all, and he loves to attend pair programming sessions. He had to struggle with everything initially because he was new to the system and had a bare minimum idea. Later on, when he understood the basics, his rocket didn’t know how to land.

He is learning much exponentially here than at his college, and it is helping him build the Frappe Cloud Marketplace better.

He also joined the team for an offsite meeting in Malshej, this was his first team meet. He enjoyed meeting new people and gaining a fresh perspective. They planned strategies and set goals for Frappe Cloud. 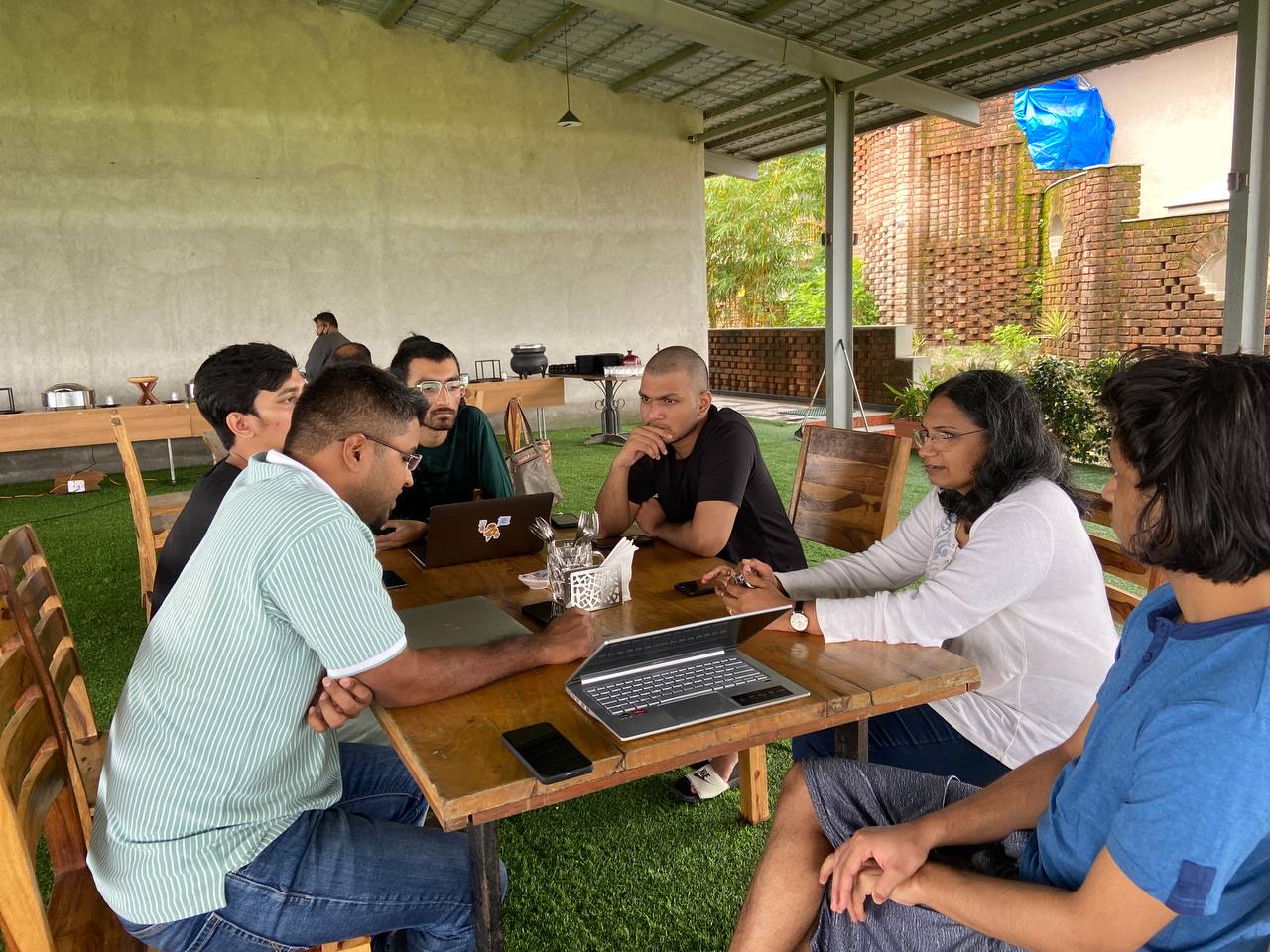 (Hussain with the team)

Hussain was obsessed with the User Experience (UX) of the app. For near about 15 days, he was stuck with the codes because he was unable to integrate the same. He thought of taking the paid subscriptions off his mind for a while. This space allowed him to create some concrete thoughts, and later he was able to ship the leftover work in no time.

Since Frappe Cloud is a production environment, Hussain was careful while modifying the codes. During the deployment, he ensured that nothing breaks including the existing user flow. He took care of the core framework, and continuously performed manual and automation testing.

Polish until you perfect the art

Hussain started reviewing the apps once the marketplace platform was live and apps started coming in. Later he polished the marketplace UX, even more, to help developers with the task. Apps on the Marketplace are built on the Frappe Framework. These apps can be extensions to existing apps like ERPNext or can have fully-featured functionality like Wiki.

He monitors the third-party apps and after his review, the app is published on the Marketplace. Fixing bugs, making changes to the UI and UX, and the review setting process gave him clarity on further enhancing the Marketplace. Rushabh has been constantly giving him feedback that is helping him improve the Marketplace.

It took several weeks for Hussain to work on building the paid apps subscription feature. This is one of the largest features he has worked on at Frappe. He started working on it about 3 months ago, but due to some more priority tasks, fixes, and features, he was unable to ship it earlier.

He also hit a phase where he was not able to make any progress on the feature even though he had it all in his mind (at least some corner of it). Taking a break is the remedy to progressive work, certainly.

Developers who want to provide some additional services like support can reach out to the Frappe Cloud Team to create paid app subscription plans for their apps.

What’s in store next?

Well, Hussain has successfully managed to get 23 apps on the Marketplace, and we have thousands of installs for the various apps. He is also working on getting 30+ more apps. He along with the team has developed both, free and paid subscriptions. Most of them are free. Some require additional configuration, and for some apps, the users don’t have to do any changes at all. He is also working on the mobile view and UI for developers to set up plans.

There is no off position on the genius switch

Frappe is thankful to Hussain’s parents for getting him a laptop. Having that machine opened up different arenas for this genius, and the journey from Mario to Marketplace is quite commendable. To be able to manage studies and at the same time work as a full-time employee, building a platform that is used by so many people is a testimony to his hard work and dedication.

This 22-year-old gentleman foresees Frappe Cloud Marketplace as a game-changer at Frappe just like Frappe Cloud. His goal is to get good quality apps, solve a lot of problems, and the list is endless.

Calling out the Developers

Wonderful. Congratulations on this milestone.

Is there any policy on what licencing model an app should follow? Can a private app be made available only on the marketplace?